The morning after the day before!

Feeling a little tired, and feet well and truly killing me after yesterday’s disaster I woke up to dark under eye circles and crazy hair after the braiding session. My hair is naturally curly but this was on another level!
However I had a little trick up my sleeve in the form of a stunning crepe 1970’s Yves Saint Laurent  Maxi LRD. ( That’s Little red dress FYI) The colour is just gorgeous and really lifts a tired complexion. It is made of panelled stripes that slit from above the knees down which make it really elongating on my 5′ 2 frame with delicate spaghetti straps.

I had decided to team this with a statement silver necklace, sourced from Morocco for my upcoming E-Store, Courtois Concept as I don’t really like straight necklines on me as I’m fairly small chested so this softened the whole thing while providing a focus point. As such I left the earrings so as not to take away from the necklace. I also wore a leather biker jacket from Zara to add an extra edge to the look and strapped myself into my Christopher Kane for Versus Versace red Leather and Velvet platform shoes.


﻿
As mentioned yesterday LFW is home of the pamper sessions so I had booked myself a hair cut with Toni & Guy for 3pm. However, my shows started at 9am and I was chock-a-block with shows until then, leaving no time for hair or makeup first. Plus my first stop was Julien Macdonald Show which is Uber glam so I needed to look the part!

Therefore I decided on a slicked back, high ponytail which I curled to soften it. Make-up wise I went with a black and silver smokey eye using Kiko products and, as I felt it was all looking a little Egyptian went with a nude lip using Velvet Teddy by Mac. This all kept me going until my hair appointment.


3pm rolled around quickly and it was off to Toni & Guy with my fabulous friend Debs of Diary of an Honest Woman for a sit down, hair cut and to watch the Ashley Isham show via Live Instagram. One of the hardest things about fashion week is deciding where to go next as it can take some time to get from each show, and as I haven’t  missed Ashley’s show in the past few seasons was gutted about the clash with the much needed hair appointment so I’m so pleased that social media is opening up the shows to us all via live streaming and extremely thankful to Portia from Pop PR and her team for sharing this with us as the show and collection was, as always, stunning! More of which later…….

Toni & Guy to the rescue!

I’ve been growing my hair for some time now and it’s the longest it’s been since I was a teenager, so I wanted to hang on to the length, but there were a lot of split ends that needed attention so my wonderful stylist and I decide on a sharp edge cut that would take most of these away and still give me a dramatic difference. I’m one of those people who like to walk away from the chair feeeling like a new me, which has over the years led to numerous dramatic looks and I was even considering a blunt fringe once more, but am so pleased she talked me out of it as it’s taken years to get my hair all the same length. I loved the way she styled it straight also as I’ve been leaving my hair to dry naturally for a soft wave recently but drying it this way made my hair look so shiny and feel really healthy!  Toni & Guy have also launched a range of spray-in hair colour under the Label M styling range brand which come in a fantastic rainbow of options and Debs decided to go for this, with a creamy peach shade that worked perfectly with her stunning Cos ensemble. I’ll defiantly be trying the range myself later on for summer as they are easy to use and sell for just £10.95. You can click the link above to check them out yourself.  Debs and I had a few more shows to attend including a rather fun party dedicated to Sponge Bob Square pants (I’ll come back to that but ONLY IN LONDON 😂) as well as drinks at Designer Showrooms where we set up camp at the Sunglasses Hut pop up shop and played dress up with the many lust worthy  Sunnies on display before heading off to the Sadie Clayton Presentation. 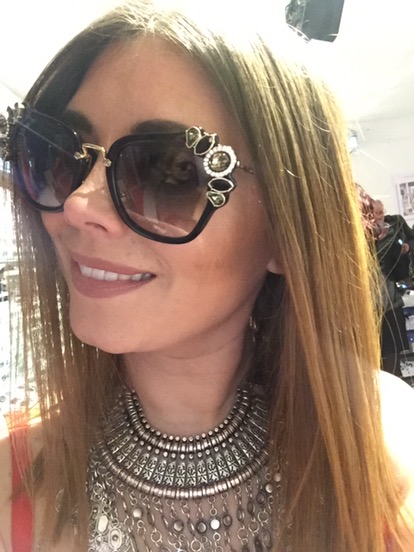 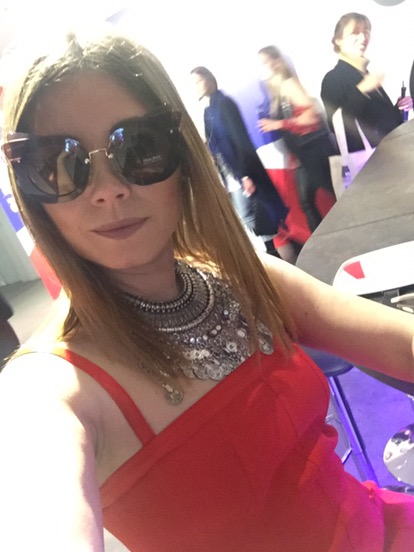 Did you see Yesterday post featuring what I wore Day 1?